The Sentencing Council is consulting on its proposals for how offenders convicted of manslaughter should be sentenced in England and Wales.It is the first time that comprehensive guidelines have been drawn up for these cases, which could include an unintended death resulting from an assault or a workplace fatality caused by an employer’s negligence.

The introduction of guidelines will be particularly useful in promoting consistency in sentencing and transparency in terms of how sentencing decisions are reached.

The draft guidelines cover four types of manslaughter, including Gross negligence manslaughter which applies where employers completely disregard the safety of employees

The proposed guidelines are based on an analysis of current sentencing practice, and in most areas, there are unlikely to be changes to sentence levels, but the Council expects that in some gross negligence cases, sentences will increase. An example could be where a death was caused by an employer’s long-standing and serious disregard for the safety of employees which was motivated by cost-cutting. Current sentencing practice in these sorts of cases is lower in the context of overall sentence levels for manslaughter than for other types.

Currently, there is very limited sentencing guidance for manslaughter. The proposed new model approach will be familiar to readers who have seen the Definitive Guidelines for: Health and Safety Offences, Corporate Manslaughter and Food Safety and Hygiene Offences which became effective from 1 February 2016 and also include guidelines for corporate manslaughter.  The same format of culpability and harm are considered in a form of matrix is taken in the manslaughter guidance. 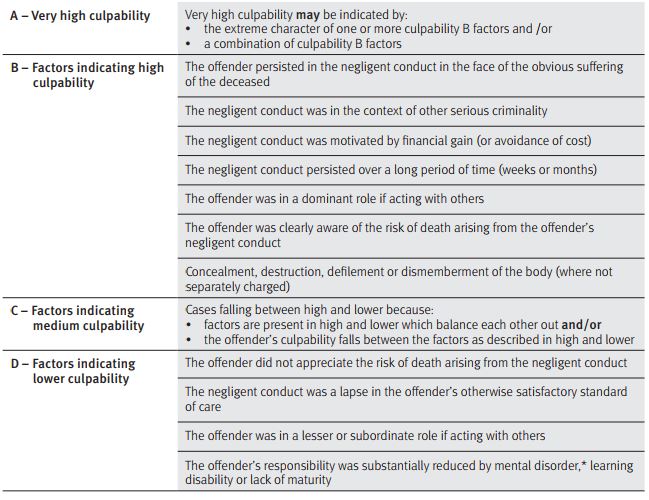 For all cases of manslaughter the harm caused will inevitably be of the utmost seriousness. The loss of life is already taken into account in the sentencing levels at the next step.

The consultation is seeking views on various areas of the draft guideline, including culpability and harm factors and the proposed sentence levels. It runs until 10 October 2017 and can be accessed on the Council’s website.